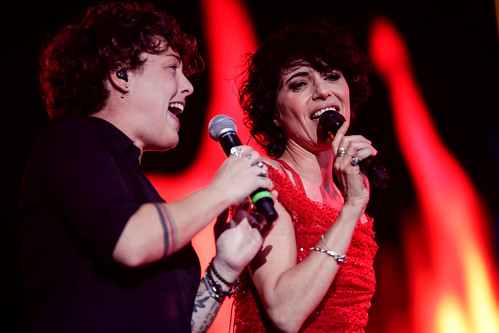 Born February 27, 1981, Josh Groban was an acting student at Carnegie Mellon University when he was offered a recording contract by Warner Brothers Records. His high school years were a combination of general studies mixed with arts training. Mentored by Grammy-winning, producer and director, David Foster, Groban tasted the music business with turns at the 1999 Grammy’s and the 1999 Governor of California Inauguration.

Groban’s first album, produced by Foster, was largely classically influenced. He worked with Sarah Brightman in 2000 on her La Luna Tour and was featured on her La Luna Concert DVD. Groban made some of his first national showings by appearing in many benefit performances. He appeared with such greats as Elton John, Stevie Wonder, Don Henley and Robin Williams in the Andre Agassi Grand Slam Event For Children, and in honoring Michael J. Fox at the Muhammad Ali Fight Night Foundation event. He also appeared in the 2001 Family Celebration hosted by President Bill and Hillary Clinton and producer/director David E. Kelley and actress Michelle Pfeiffer.

Groban’s 2001 work with David E. Kelley led to a performance on the season finale of Ally McBeal and a role in the 2001/2002 Ally McBeal season. His 2001 self-titled debut album went double platinum within a year of its release. Since his debut, Groban has been busy in the music industry. He performed with Charlotte Church at the 2002 Winter Olympics, with Sissel Kyrkjebo at the Oslo, Norway Nobel Peace Price Concert, and in 2003 at the Vatican for a Christmas performance with music masters Lionel Ritchie and Sting. He has also performed with Celine Dion, Nick Carter, Yolanda Adams, Enrique Iglesias, and Barbara Streisand. Groban released his second album in 2003 entitled Closer and his third, Awake, in 2006. Groban continues to have a strong presence on the Billboard charts and appeals to a wide market.