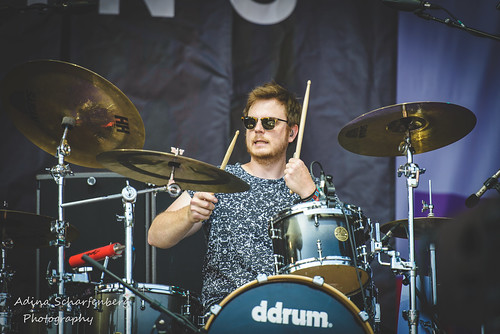 As we continue to see the sales of CDs fall, it is obvious that the distribution channels of music are changing. But there is no disputing that digital downloads are the new “norm” for many people to acquire their music, be it one ninety-nine cent download or an entire album. As I ponder these changes, I still think that the vinyl record, as prehistoric as it is, is gaining popularity as well as making new fans and believers that this is the best audio format that can be heard.

As a vinyl lover, I am pretty set in my ways; no one has to convince me of the staying power and musical greatness of the vinyl record. So I was thrilled when I had a chance to interview a young man who shares the same views as I do.

I had the distinct pleasure of speaking with a nineteen-year old vinyl lover from Campbell River, British Columbia, Canada named Steve Robertson; who was gracious enough to share his thoughts and views about this old, yet treasured format. What follows is a short discussion with Steve as he shared his passion and love for vinyl records.

I asked Steve what drew him to vinyl, why does he prefer this audio format?

“Vinyl just sounds so much better; it has a unique sound that can’t be duplicated. There is a feeling of satisfaction when actually holding a physical product. And the cover art, not only from the past, but from new artists, is another reason I prefer vinyl records over any other format. I also get a sense of satisfaction in knowing that when I buy an artist’s work on vinyl, that I am supporting the musicians who release it, it just isn’t another free download,” explained Steve.

I asked Steve how long he has listened to vinyl and about what format his friends prefer.

“I have been into vinyl for several years now and vinyl is huge in British Columbia and most of my friends prefer it as well. We both like the clear sound and experience you get when playing a record. And we are interested in DJ-ing, so it fits right in. Last year I purchased a pair of Stanton turntables that have certainly helped me in my DJ-ing efforts and I plan on upgrading very soon to take it to the next level. I love the control that I have playing the music that people want to hear. The goal of a DJ is to take two different songs and blend them together in a smooth seamless way without the crowd knowing. Taking elements of one record and blending them into the other, you can then skillfully mix out the first song until it is just the new track playing. It’s like creating a new song and new music in a way. You make sure to keep up a steady stream, a continuous flow of ups and downs, it’s like telling a story, you want to keep people intrigued and interested in the music,” said Steve.

“I really think that vinyl is coming back, it sure is in our area. If my friends and I had to pick, records would be our choice and the best option to hear our music. But, they are harder to acquire, our nearest vinyl shop is an hour and a half away, so we buy most of our vinyl online.”

I asked Steve about his vinyl record collection and wanted to hear more details about his passion for D J-ing.

“To the first part of your question, I would say that I have over three hundred records, mostly classic rock like Zeppelin or Heart. But I have about seventy-five records that would fall into the electronic dance genre. That is mostly what I play when I DJ because that is what the crowd I play for wants to hear. When you’re mixing records, the control you have over the sound and the way you can manipulate the music is just like playing an instrument. You can blend and put effects on the music using your mixer or you can do some hands on scratching and add your own unique sound to it. As far as scratching goes, it’s a whole new level of DJ’ing because, in a way you are creating a sound that has never been heard before, it’s almost like live production,” explained Steve.

It was certainly refreshing to listen to Steve speak about his love for vinyl records. His enthusiasm for the format was clearly evident and especially welcome to me, a vinyl purist. And we both agreed that whatever musical genre it is that you enjoy, it certainly sounds the best emanating from a vinyl record. And that is a perspective that will help the vinyl record survive, if not thrive.

I want to personally thank Steve for his cooperation and candor in regards to our discussion about vinyl records. It is nice to hear someone from a different generation, not only passionate about the music that he listens to, but about the audio format that he chooses to listen to his music.